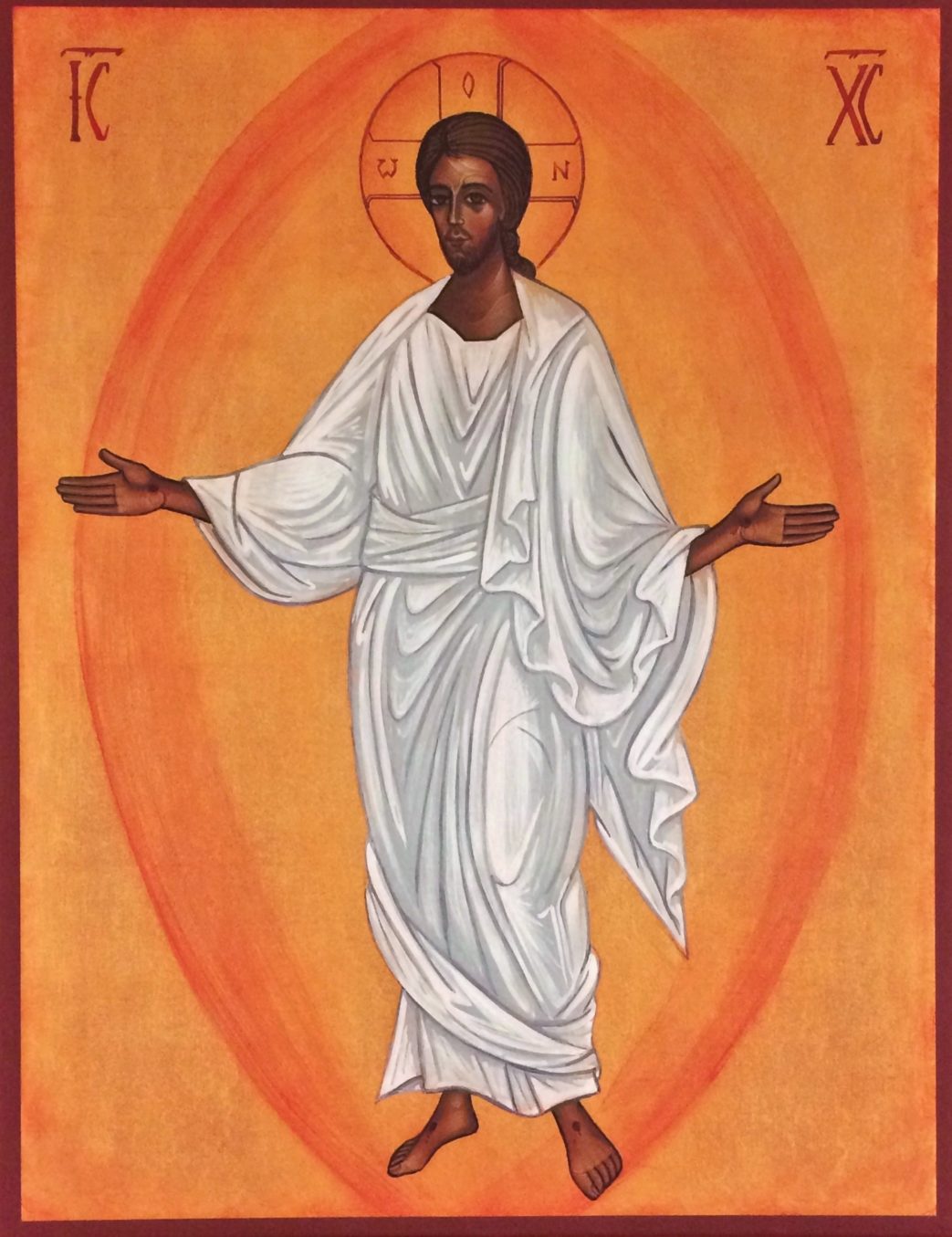 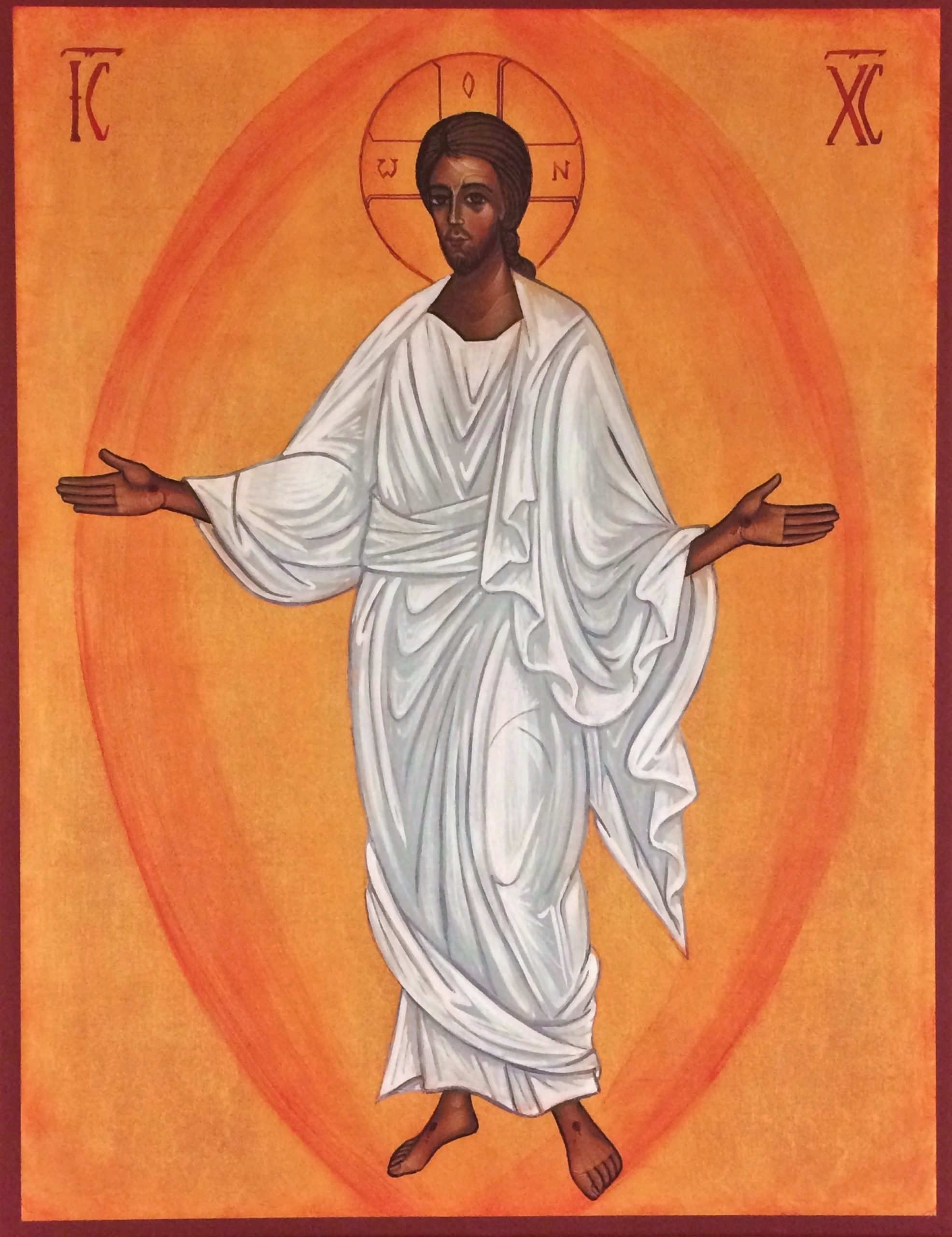 Sister Marie-Paul Farran (1930-2019) was a religious sister active in ministry at the Little Sisters of Jesus Convent (Order of St. Benedict) in Jerusalem, Israel.  She was of Palestinian and Italian descent.  Once she entered the religious life, she felt deeply the tensions between Arabs and Jews in the Holy Land, praying and offering her life and presence for peace in the land of Christ’s birth.  Over the years, she became a world renown iconographer.  She viewed her icons as instruments of peace and love in a war torn world.  The beauty of her icons matched the beauty of her heart. Her icons may be found in churches and individual collections all over the world.  A copy of her icon, “The Resurrected Christ," hangs above the altar at the Church of the Advocate (The Red Door) and welcomes all with his arms wide open to the sacred space of our varied ministries.

Religious icons come to us from the Eastern Orthodox branch of Christianity.  Icons are not just religious paintings capturing a time in the life of Christ or a Biblical scene.  Rather, icons are viewed as windows into heaven.  Icons are a glimpse into a spiritual realm that offers hope, joy, and peace to the viewer.  Icons are not painted but are instead written.  They are a written window reflecting the good news of God’s love and presence.

In writing an icon, a set format is followed that includes prayer, tracing, and multiple layering of water thin pigments sometimes including more than a hundred layers.  The icon is labeled usually in Greek.  The Resurrected Christ icon is labeled on the top right and left corners.  The top corners contain the Greek monogram “IC  XC” for “Iesous Khristos,” Jesus Christ.  The Greek letters above his head are “omaga, omicron, and nu” spelling “HO ON.” In English, this becomes, “Who Am,” the name used for God in Exodus 3:14.  Jesus was an Aramaic speaking Jew from the rural area of Galilee which is reflected in this icon.  The Jews of this area have a dark complexion and narrow facial features with dark hair and dark eyes.  The oval shape surrounding Christ in the icon is called a mandorla.  A mondorla represents an opening in the fabric of the world to expose the glory of heaven.  It is also in the shape of an egg, an ancient symbol of the resurrection of Christ in that the egg breaks open just like the tomb. 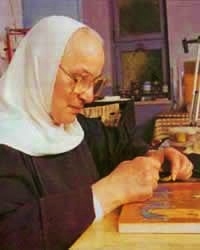 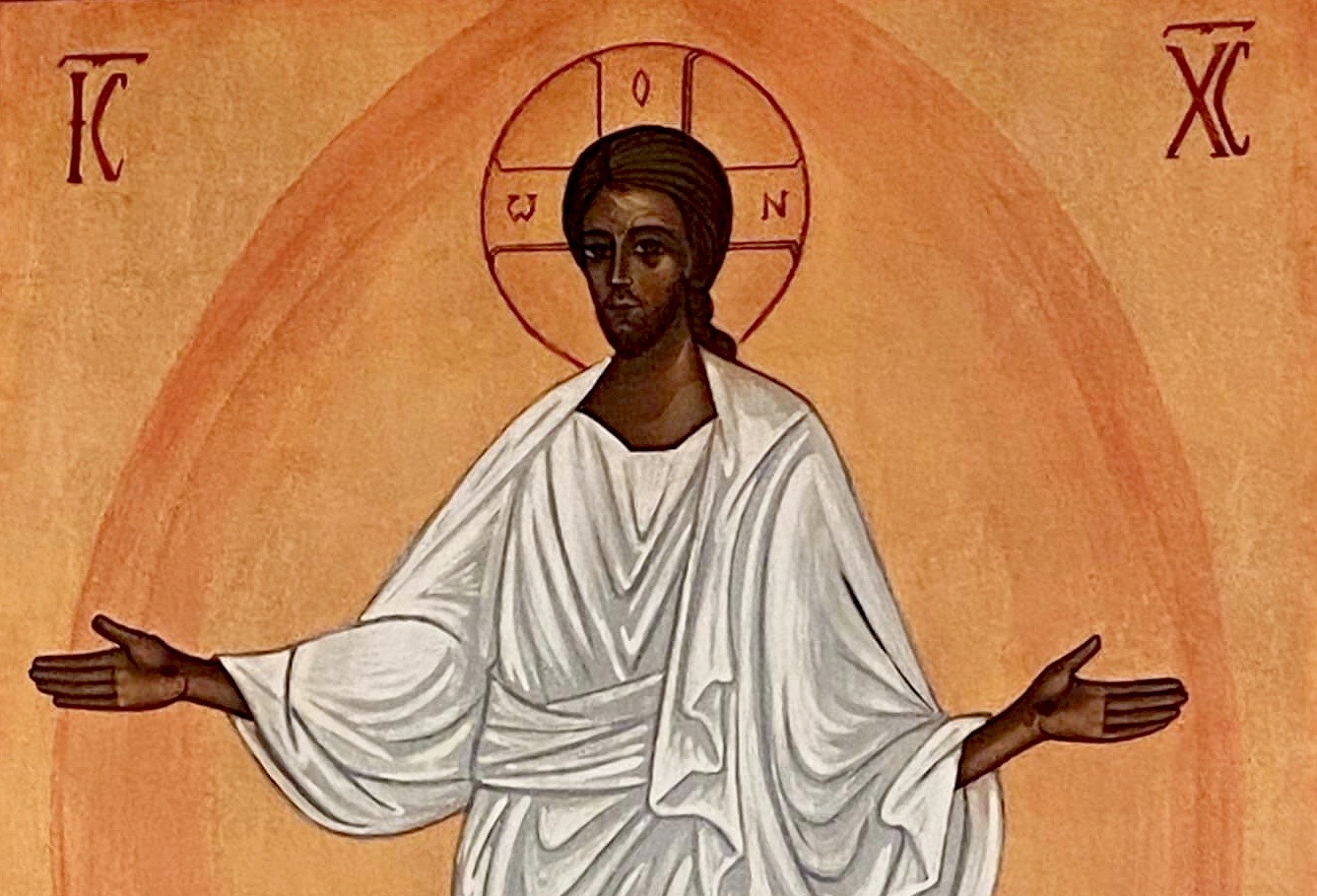 In 2016, I attended a spiritual retreat at Transfiguration Spiritual Center in Cincinnati Ohio where I came across a prayer card with the Resurrected Christ icon printed on one side.  I was immediately drawn to the image.  After returning home, I shared the image with Rhonda our administrator at the Church of the Advocate who was also moved by the icon.  I mentioned to her that such an icon would be a great focal point for the Church of the Advocate.  She encouraged me to see what could be done to find a large copy of the icon.  The back side of the icon listed Conception Abbey as the printing company.  I called The Printery House at Conception Abbey to find out more about it.  The director of the Printery House told me that Conception Abbey held the printing rights to all of Sister Maria’s icons.  They could print a large version of the icon for $4000. The Church of the Advocate didn’t have such funds.  I didn’t want to give up so I called my brother, Joel Huebner.  At the time, he ran a design and carpentry company in Indiana.  He told me that if I could legally obtain a copy of the icon, he could print it on canvas.  He would charge us for the ink and the canvas which cost approximately $100.

After we installed the icon, I mentioned to Rhonda the dream of having a sanctuary lamp and ambry which is a cabinet holding the sacred oils and the reserved sacrament.  She said, “Go for it!”  I contacted my brother, and he agreed to make us an ambry, a sanctuary lamp, and two matching wooden candle sticks.  As a way to honor Sister Maria, he imprinted on all items the Jerusalem cross which is found throughout the Holy Land and consists of a Greek cross with four outlying cross.  It represents the life of Jesus as the center and the good news of Christ Jesus spreading in all directions to all people.   Our inlaid wood processional cross that matches everything, was a gift from my family.  It was made by a great uncle who was an inlaid wood craftsman.   Finally, on the Sunday after Easter 2018, all sacred items were in place at our worship and ministry space and blessed. 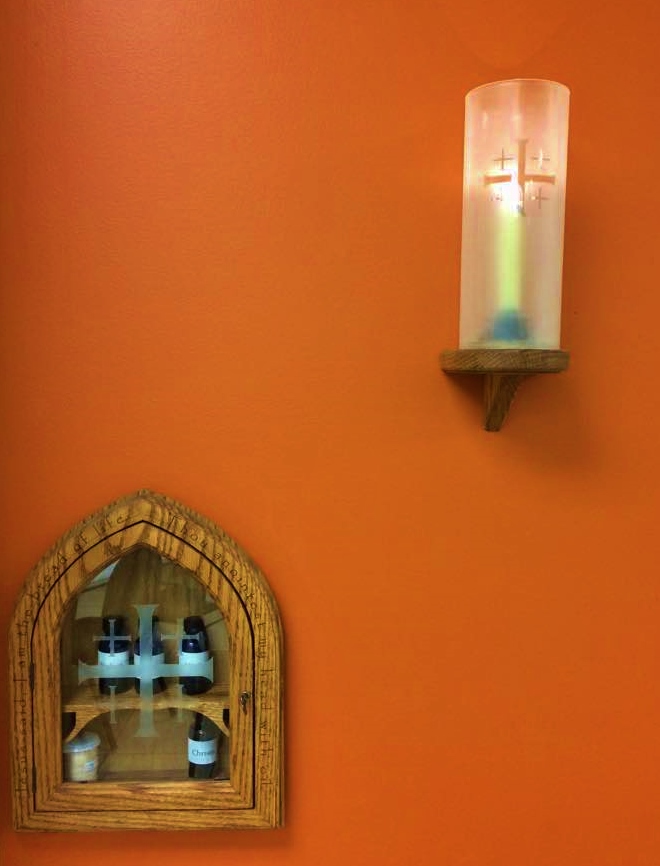 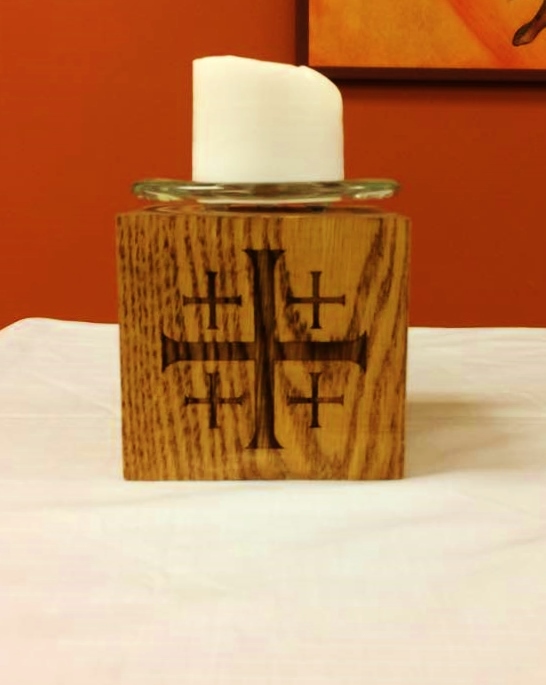 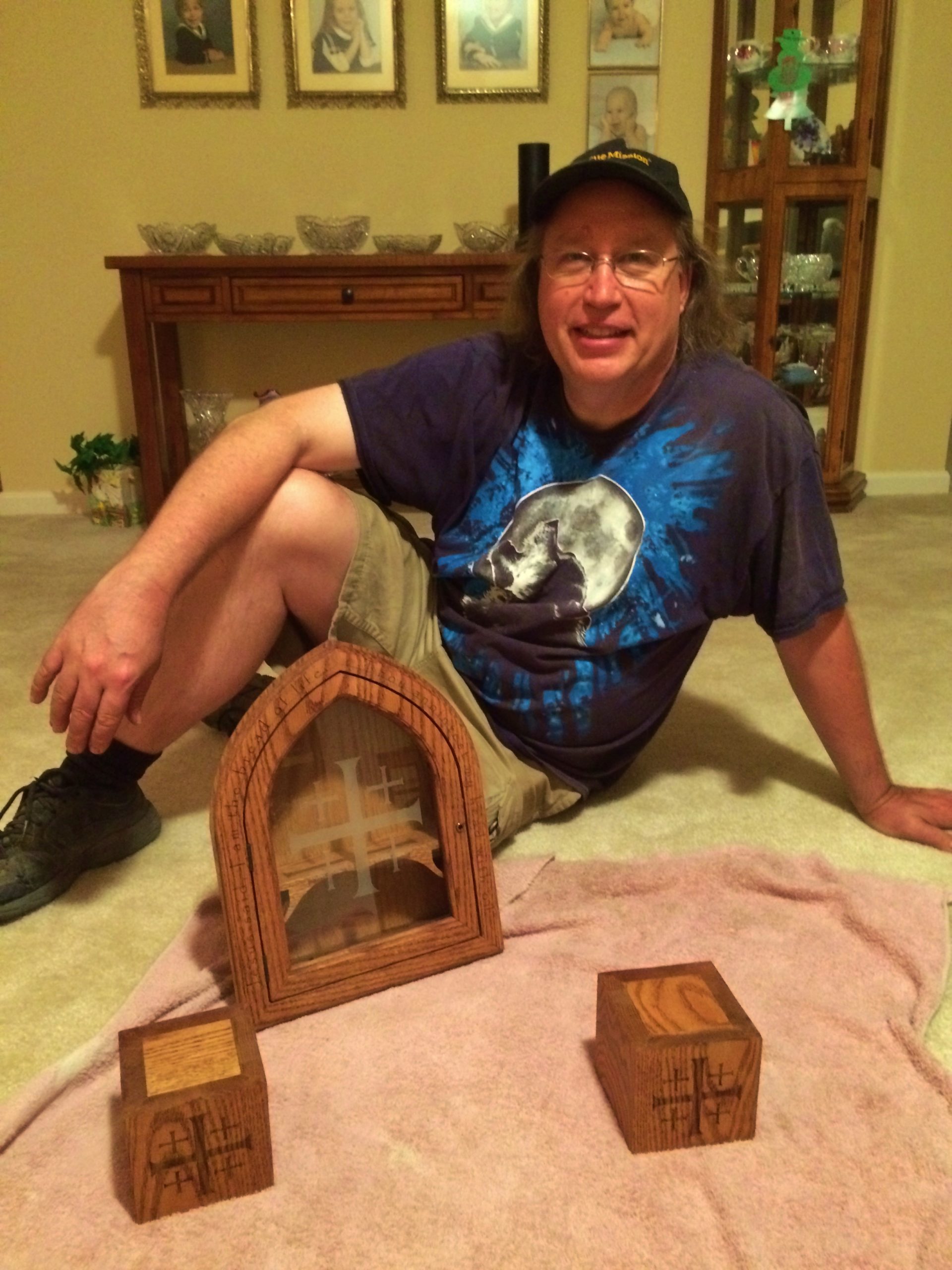 Jesus greets all who come through our red door with his loving embrace. Many individuals are captivated by the icon, and it brings healing, peace, and love to all who gaze upon it.  Jesus’ wide open arms are always ready to reach out to us.  When I look upon our icon, I am reminded of the words of Christ found in Matthew 11:28 as follows:  “Come to me, all of you who are weary and carry heavy burdens, and I will give you rest.” I especially give thanks for Sister Maria-Paul Farran for blessing our mission and the world.  May all that we do at the Church of the Advocate always point to the Resurrected Christ.  Thanks be to God.  Alleluia! 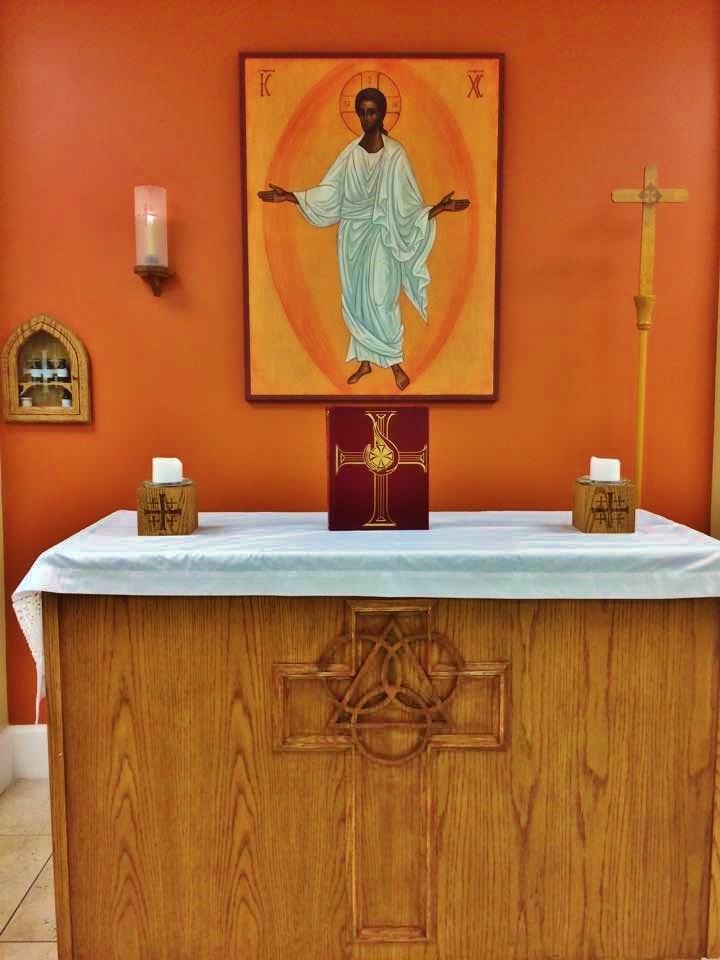 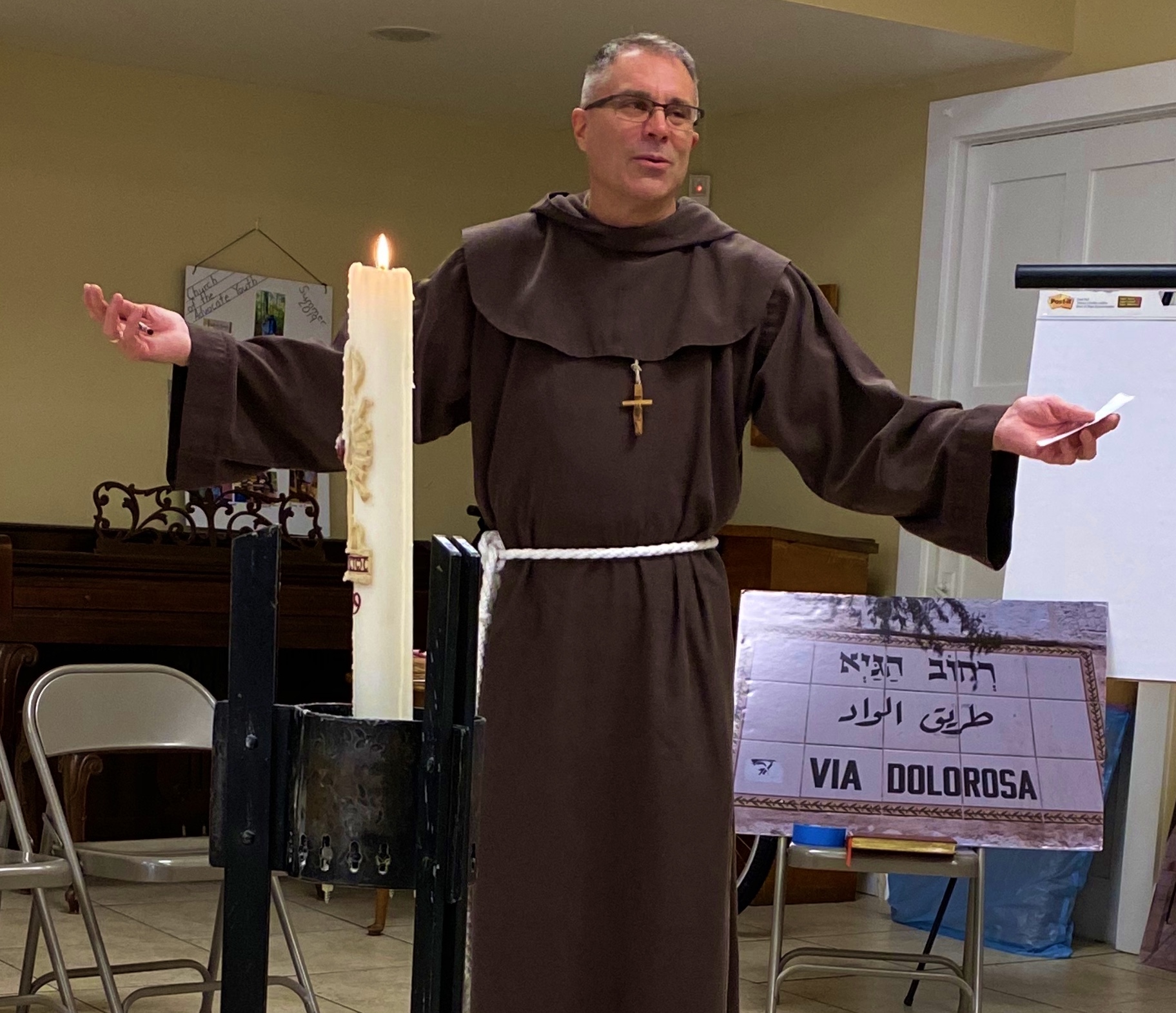